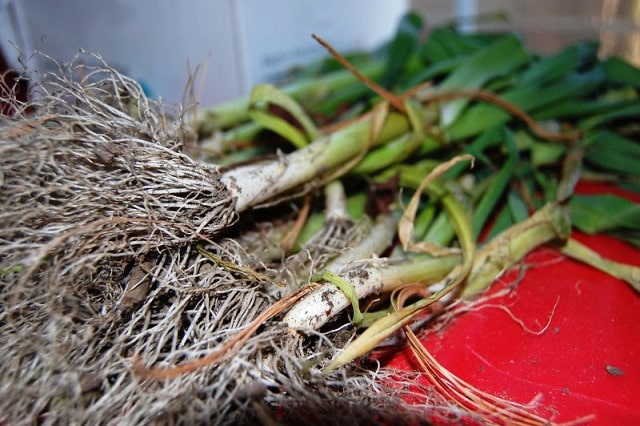 Leek is a vegetable that is relatively easy to grow. The edible portion of the leek is the bundle of leaf sheaths and the white base. Raw leek contains 83 percent water,14 percent carbohydrates, and 1 percent protein. So some people consume it in raw form, i.e., in salads. However, some people cook or boil leeks and eat them because it increases the taste.

Growing leeks at home are pretty fun. It’s quite interesting to grow leeks in your garden, cut the leafy portion, and use them to prepare food.

You can grow leeks either by seed or by stem cutting. Both methods are pretty easy to cultivate in your garden.

MORE POSTS: Can you grow rice from store bought rice?

How To Grow Leeks From Store Bought Leeks?

Leeks are fresh green vegetables in the winter season. Leeks grow well in the cold season, and the most favorable temperature for growing leeks is between 55 to 75 degrees Fahrenheit. They become mature in almost 180 days.

Growing leeks from stem cutting are quite a fun project for your entire family.

You need to follow the below steps for growing leeks from store-bought leeks.

2. Put The Roots In A Container Filled With Water

Take a container or a jar filled with a few inches of water. Immerse the leeks so that the top portion of the stem should be above water. Don’t immerse the whole leek into the water. If you do so, then it will never grow into greens in the future.

If the root is not standing up on the water, then push a toothpick on the leeks.

3. Place The Container Near Window

You need to place the container near a window where the leeks can receive sunlight for maximum hours. You can observe greens within three days.

You can cut the greens as required with the help of a scissor or knife and use them for cooking.

You may even transplant the plant to a pot where it will grow better than in water.

If you observe greens coming from the leeks are 2 to 2.5 inches, it’s time to transplant them to the pot filled with nutrients to enrich the soil.

7. Take Pot And Cover The Holes With Some Newspaper

Pots are readily available in the nursery. You can buy any of them for growing leeks at home.

After bringing the pot, you will observe holes at the bottom. These holes are there so that they can drain out excess water and prevent root rotting.

Well, if you are doing leeks transplantation outside, i.e., in your yard, you don’t have to worry about the mess. So, you can avoid using newspapers to cover the potholes.

8. Fill The Pot With Soil

Take soil mainly consisting of perlite, sand, and compost and fill it in the pot. If you use soil enriched with nutrients, then that will help in the proper growth of the plant.

9. Dig A Hole At The Center Of Your Pot

Now start digging a hole at the center of the soil to at least 2.5 inches so it can cover the root and its white portion completely.

10. Place the Leek Into The Soil

Now place the leek roots and their white portion in the soil carefully. Pack the soil properly so the leeks will be firmly in their place. If you observe a mushy layer on the white portion of the leek, it’s better to remove it before putting it in the soil.

11. Place The Pot Where The Leek Will Get Adequate Sunlight

Leeks love sunlight. They require at least 8-9 hours of sunlight for proper growth. So, keep the pot where the leek will receive adequate sunlight.

If you want to keep the pot inside your house, keep it near the window where it can receive a good amount of sunlight.

Leeks need water to grow. Check the soil condition. If you find it dry, you need to water the leeks immediately. Additionally, in the summer months, leeks need more water to grow.

You will be harvesting fresh green leaves after 2-3 weeks.

13. Remove The leaves That Have Yellow Spots

If you find any leaves that have yellow spots, then it’s not a good sign. It may be because of either overwater or fungal infection. Remove the infected leaves immediately from the plant.

14. Uproot The leek If The Foliage Starts To Get Yellow And Wilt

If you observe the foliage of the leek has started to get yellow and wilt or you notice white fungus in the bulb region, then the soil has become contaminated. You need to uproot your leek immediately.

15. Uproot The Leek When It Attains Its Size

Most leeks will stop growing when their stem is 1 inch wide. So, if you observe your leek’s stem has already one inch, then it’s time to uproot it. You can use the end of the root again to grow new leek or discard it. You can use the green portion of the leek for cooking.

MORE POSTS: How to grow kiwi from store bought fruit?

How Many Times Can You Regrow Leeks?

You can regrow leeks from already harvested leeks. For example, if you have brought leek from a store, cut the top end to be used for cooking. The root portion and a few inches of the white part can be used for regrowing. Once it becomes mature or when the cold season gets dormant, you will find seed stalk on the leek. The seeds can be used again for regrowing another leek. Even you can uproot the plant and use the root and a few inches of white to grow another leek.

Leeks are lovely green vegetables and are enriched with nutrients. You can quickly grow them at home and get fresh green leaves by the above methods. You can consume them directly by making salads or cooking them to increase the taste.

We thank you for reading this article and hope you like it. You can share it on social media so many people can read it.

MORE POSTS: How to grow garlic from store bought?

When And How To Harvest Purple Kale?
How to grow jalapenos from store-bought peppers?
How to germinate and plant winged bean seeds?